We believe that studying a musical instrument has many far reaching benefits which play an essential role in the creative, social, emotional, and cognitive development of children. Participation in instrumental music programs helps to cultivate a greater love, appreciation, and understanding of music - one of humanity's oldest art forms and means of expression, and fosters a sense of belonging and accomplishment while also promoting self-esteem, self-confidence, self-expression, self-discipline, teamwork, and organizational skills.

Scientific research into the effects of studying music continue to produce new data about music's relationship to brainpower and academic success. University research studies have shown that students who participate in instrumental music score significantly higher than their non-participating peers in standardized tests (such as the S.A.T.). Furthermore, significant correlations have been found between the number of years of instrumental music instruction and academic achievement in math, science, and language arts*. 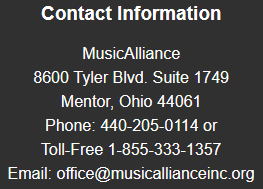 MusicAlliance does not discriminate on the basis of race, color, gender, religion, disability, national and ethnic origin, or any other category protected under applicable law in its programs, activities, or policies.
Copyright © 2022 by MusicAlliance Inc. All Rights Reserved.